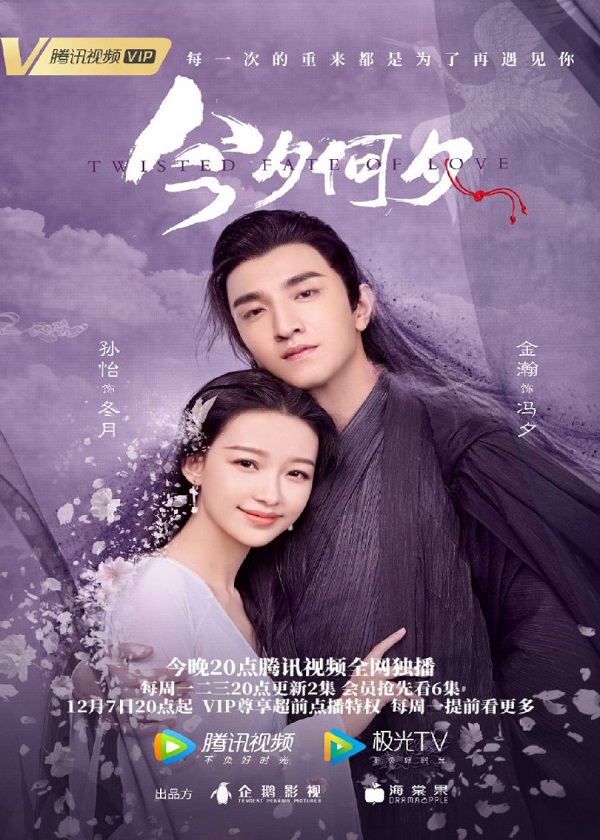 “Twisted Fate of Love – 今夕何夕” is about story of the oldest of friends, Third Prince Pang Yu and Minister Feng Xi have spent a lifetime caring for each other as brothers. As different from each other as night and day, the two friends were an unlikely pair but their friendship has successfully stood the test of time. But their lifetime of friendship begins to crumble, after meeting the passionate and lovely Dong Yue.
A brave general in the Dingyuan Rebellion, Dong Yue was sent back in time to stop a war that would claim the lives of countless innocents. It was during her travels through time that she met both Feng Xi and Pang Yu. Though Dong Yue’s presence in Pang Yu’s life inspired him to involve himself in the political workings of his family, his sweet disposition somehow never managed to capture Dong Yue’s heart. On the other hand, Feng Xi’s roguish charms touched Dong Yue’s heart in a way she had never experienced before. Though caring for both of the friends, it wasn’t her mission to travel to time simply to fall in love. There was a war-mongering villain who needed to be stopped.
With Lu Yuan Tang poised to tear the nation apart, Dong Yue must find a way to stop him. But it’s not a task she can accomplish on her own. Only with the help of Pang Yu and Feng Xi’s help, will she be able to set things right. Will she be able to reconcile two brothers divided by jealous hatred or are her people doomed to suffer an unimaginable fate?